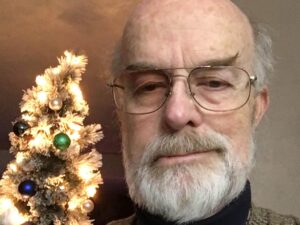 Mark McBride is a retired senior research engineer from the Applied Research Lab (ARL) at Penn State and the recipient of the 2022 Fischer Award of Distinction, which recognizes friends, donors, alumni, and volunteers who have distinguished themselves through extraordinary service to advance the Penn State Outreach and Online Education (OOE) mission. McBride and two additional Penn State alumni received awards at the annual Penn State OOE Appreciation Dinner.

As a child, McBride spent years in tow at labs on the University Park campus with his father, who was employed at the University. After his father passed away, McBride was given an opportunity to work for the University at the age of 16, and he later received a tuition reduction when earning his bachelor’s degree and his master of science in aerospace engineering. He began working for ARL in 1968 and retired as a senior research engineer in 2005.

McBride said he appreciated all the opportunities he was given through Penn State and wanted to repay the University by establishing the “Mark W. McBride Endowment for Shaver’s Creek” to provide funding in support of experiences that encourage students to see the value of science, technology, engineering, and math (STEM) in conserving the environment.

“The tuition benefits my father earned allowed me to attend Penn State, and the engineering experiences I gained as a student led to a career spanning 40 years. This showed me that STEM is necessary to understand many natural and physical processes,” McBride said. “I felt supporting Penn State Outreach and Shaver’s Creek Environmental Center and establishing a STEM focus for young children was the best way to preserve the future of the environment and show kids that STEM is fun, interesting, and leads to understanding the world around them.”

“I view the work of Penn State Outreach as one of the most important functions of the University,” McBride said. “The knowledge and expertise found at the University should be easily available to all. The internet and special areas like Shaver’s Creek are ideal ways to provide this knowledge to the community.”

The 2022 Penn State World Campus Outstanding Alumnus Award was given to the following two alumni for their contributions in their respective fields, society and communities.

Greg Bowden is the associate dean for development and alumni relations at Johns Hopkins Carey Business School and the recipient of the 2022 Penn State World Campus Undergraduate Alumnus Award. Prior to his current role, he served as the senior director for development at the Johns Hopkins Berman Institute for Bioethics, director of development for Greenwood Genetic Center, executive director of the South Carolina Birth Defects Foundation, and in other capacities with the Catholic Diocese of Charleston. He graduated from Penn State with a bachelor’s degree in organizational leadership and holds a graduate certificate in nonprofit management from Johns Hopkins.

“I am part of a development team, which encompasses over 500 staff and more than $1 billion raised annually,” Bowden said. “I love development because I get to work with people who are making generous philanthropic decisions that improve our society and highlight the best of our humanity. I am also fascinated by the motivations that sit behind philanthropic decisions.”

Bowden also serves as a volunteer in the Leadership Assessment Center as part of the Penn State Online Leadership Development Institute.

“This is an exciting opportunity for me to give back to other students. Developing leadership skills is relevant to any career path and it is absolutely a learned skill that needs to be and can be developed,” Bowden said. “A lot of my advice draws on hard-earned lessons in my own work, so it feels good to pass that advice along and hopefully give these students a smoother path.”

Matthew Allen also is a recipient of the 2022 Penn State World Campus Outstanding Graduate Alumnus Award. Allen is a physical education teacher for William Paca Elementary School and a football and baseball coach for Towson High School in Baltimore County, Maryland. He is a United States Army veteran who earned a bachelor’s degree in physical education from Towson University and a master of education from Penn State. He was awarded the Army Commendation Medal for his service in Operation Iraqi Freedom and the Simon A. McNeely award for outstanding teaching and service from SHAPE Maryland. Allen advocated for his school to acquire the first Lu Interactive Playground, an interactive immersive teaching tool, in the state of Maryland.